What does this city offer that no other place can match? Is it the famous historical landmarks or the diverse cultural trends or perhaps the myriad of changing seasons? Is it the rustic charm of narrow inner city roads that people fall in love with or the mouth-watering culinary delights that one can’t simply ignore?

When the city is preparing itself to sleep, it is when this market comes alive to serve the insomniacs. The 24 hours round the clock service is being provided by the relatively newly established and now flourishing ‘H’ Block Market of Defence.

Basically, it’s not only about the market that attracts a horde of people who visit it till the wee hours of morning that include young people, mostly teenage boys, friends looking for a simple and inexpensive place to hang about and families belonging to all types of backgrounds. It’s a simple equation; a city is lifeless without its inhabitants. Lahorites’ energy is mostly spent on discovering food/fun joints that are not only economical but also provide them with few hours of frolic from the mundane activities of the day. It is a sheer joy as a bystander to watch these youngsters thronging the famous ice-cream, paan and fresh fruit joints in and around the vicinity of the ‘H’ Block Super Market. The place has become a hub to meet up, gossip and ramble and is usually jam-packed if the weather turns pleasant.

This place has a huge number of paan and cigarette shops that have almost doubled in the last two years. What started off as a mere khokha has turned into a full-fledge shop because of the burgeoning of the market. The ‘Jaidi Paan’ shop seems to be ruling the roost with over 35 chhotas (servers) working for them and the inclusion of ice-cream and fresh juice offering has done its bit for the owners. As a frequent visitor of the place one gets totally overwhelmed at the sight of servers rushing from all nooks and corners to get the orders.

One talks to them and realises how important it is for them to get the maximum clients in order to get the daily wages. Nadeem who is an old server of the shop earns about 400-500 rupees from the tips that he deservingly receives in his 12 hour shift. He gets his daily wage only if he brings a business of 2,500 rupees. The 200 rupees daily salary will decline if the server brings less. Coming from a small village near the Wagah border he switches 3 buses to reach at his work place and spends about 200 rupees on transportation daily. “I am only able to save 200 rupees daily to spend on the family that consists of 4 brothers and three sisters.”

It is worth mentioning here that a rough estimate of nearly 400-500 servers who provide their services in the night time shift and toil in all types of weather are illiterate or drop-outs from school. It is due to extreme poverty that they are forced to work and mostly all of them mentioned their ‘majboory’ helplessness in dealing with escalating daily life expenditures. The families are living in hand-to mouth conditions and each household has 8-10 members which have increased the tribulations for these people.

Kashif who is only 9 years old and is desperate to study, lives in the Kamaha village near DHA. “The rich snobs run away without paying and that invites beating for us,” he said. These servers are given one meal at around 2am and they start off their duty hours at 6pm sharp that goes up till 6am in the morning. There is no fixed income for these poor working souls who are only dependent on the tips and wait for the Eid or some special occasion to earn a good amount.

In comparison to other markets of DHA area this one offers a huge variety of business that includes desi, Chinese and fast food restaurants, franchises like Subway, Mc Donalds and KFC, BBQ and Biryani outlets which are open till late. The segmented market encompasses banks and pharmacies in the front row and then branches out in various groups that have tailoring and lace shops in two lanes, halwa puri and nihari shops, book stores and gift shops along with the renowned Shezan and Gourmet bakeries that have more or less fulfilled the requirement of the residents. The property dealing shops that were quite in number few years ago as there was a property boom then; now have dwindled and the music and video, clothing, mutton, vegetables and fruit shops have taken over. 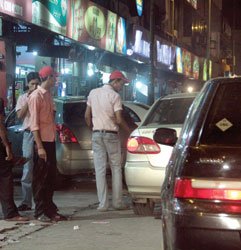 The place gets even more crowded during Ramzan because of the availability of jalebis, samosas, dahi baray and other Ramzan specialties. A cacophony of noises could be heard during iftar hours which have led to massive traffic jams. Major brands have opened their outlets in this market which includes CrossRoads, Textilion, Bata, and Bareeze. Eunuchs are also found in great number and are often seen harassing the visitors as they keep on knocking the windows of cars to get some alms. The night life gets busier in and around the famous Shezan restaurant which has the largest seating capacity and consists of two dining halls. The reasonably priced eatery which was opened few years ago has found a selected clientele and also does quite well in the catering and arrangement of parties and engagements. The concept of home delivery and take away has been picked up by almost the entire food street of the market that includes Chatkhara, Dogar, Tarka, Biryani Xpress and many other more.

Started off as a tandoor; the Dogar has branched out and now they proudly boast a chain of shops that offer puri halwa, fruits and vegetables, salads, ice-creams and fresh fruit juice shop with the name of La Fruita which is doing great business. “It is only possible because they have maintained their standards of quality and hygiene,” said Basit who regularly brings his family to one of the shops owned by Dogar.

Summing up, the market place offers a wide array of activities which have become a norm with the fast lives of young and happening crowd. H Block Market of Defence is gearing its way towards becoming the next ‘Liberty’ of Lahore. 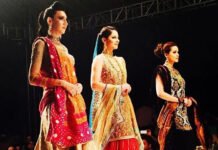 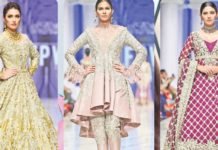 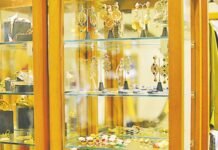