At the very outset, what strikes you the most about the young, journalist turned photographer Sonya Rehman’s ode to Lahore in the shape of postcards is the emotion it elicits — for a common Lahori.

In her maiden exhibition of postcards, verily titled ‘From Lahore With Love,’ Rehman, a Columbia graduate, hoped to “revive the joy of snail mail” at Ze Grill-The Art Café, Gulberg.

She was also found asking the visitors on the occasion, “What does this city offer that no other place can match? Is it the famous historical landmarks or the diverse cultural trends or, perhaps, the myriad changing seasons? Is it the rustic charm of narrow inner city roads that people fall in love with or the mouth-watering culinary delights that one simply can’t ignore?”

Then she went on to answer it for herself: “It’s the true Lahori spirit that never ceases to impress, for the air pulsates with energy and it is at its best if simple moments like these are captured on lens and brought in focus.” 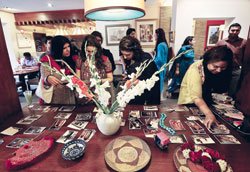 All told, the “mini postcard exhibition,” as it had been advertised on Facebook, provided the visitors with a unique experience which was not without a purpose, so to say. The postcards bore the famous and the not-so-famous facets of the city, put together by the gorgeous lady who said she was in constant search for the ultimate feel of the city that she has grown up in.

Rehman who is an amateur photographer had stints of writing at The News On Sunday, The Friday Times and Hello! before she took a crash course in photography from a school in New York. Her clicks were widely appreciated for the interesting character these lend to Lahore while highlighting the city’s variegated aspects.

Talking to TNS on the occasion, she said, “Capturing images on foot soon became a serious interest and after being pushed by family and friends, I decided to do a series on the diverse moods of my native city [Lahore].”

Explaining how the idea for the exhibition hit her, Sonya Rehman said, “A friend proposed the idea of making postcards out of the pictures after having seen my work on Facebook.”

The exhibition opened on a rather slow start but picked up soon as people who had read about it on the social media began to stream in. Fashion and product photographer Mohsin Khawar was one prominent visitor. “A hundred rupee postcard says a lot about its setting,” she said, while admiring the quality of the clicks.

The old city, according to Khawar, is “diminishing and the people are not aware of what they are about to lose if the skyline of Lahore is devoid of its beautiful minarets, domes and unmistakable stamp of rich culture and heritage.”

The landmark city of Lahore boasts historical places such as the Fort, mosques, numerous gardens and tombs. Not only these, but there are countless impressions that refuse to leave one’s mind if one is able to walk around the city and see the sights in person. 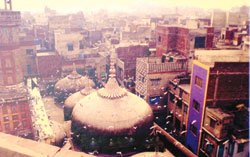 Rehman had an advice for the youth: “Step out of your comfort zones, your air-conditioned domains and posh houses and brace for the real places and the true spirit of Lahore!”

Cobblestone pathways of the inner city, the picturesque Hazuri Bagh and Shalamar gardens, intricate tile work at Sheesh Mahal, breathtaking views of the Wazir Khan Mosque and the Truck art along with dozens of other sights had the visitors to Ze Grill captivated.

Photo walk is a popular concept abroad; it is when one actually comes into contact with the real side of people. Sonya Rehman said she had to interact with street vendors, beggars, shopkeepers and craftsmen at work and common people who were going about their day-to-day things. “The understanding of the city is very important for its inhabitants,” she said.

The diverse moods of Lahore on display. — Photos by Rahat Dar

Sonya Rehman claimed to have taken the ‘photo walk’ in compiling the exhibition.

The Cube gets a makeover

Perfect spot for your evening cuppa